by Quinntero
by Assignments, Best Work, ds106, Visual
1 Comment on The Kessel Run

The daily create was to make a map depicting a well-known story, and I went with the Star Wars universe from Episode IV: A New Hope.  This is known as “the first one” for folks that remember 1977, the year it was released. Using PowerPoint, I fooled around with the shapes menu and made circles for stops, and connecting lines for routes.  You’ll notice Alderaan is currently not in service, since the planet was blown up by Imperial forces using the Death Star.  I had a little fun with the quote from Obi Wan Kenobi “Mos Eisley Spaceport…..a wretched hive of scum and villainy”. Sharp observers will notice you’d have to be on a really fast ship in order to make the Kessel run in less than 12 parsecs. 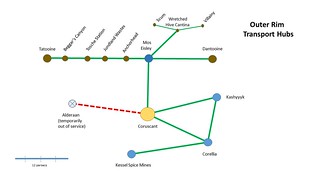 One Response to “The Kessel Run”