It had to be done. 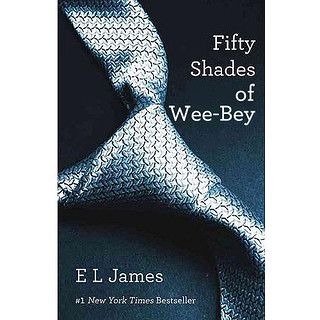 Design a book cover.  I had to go with parody, because I don’t take fluffy beach froth like this book too seriously.  On a deeper note, there might actually BE fifty different aspects to Wee-Bey’s character.  We see the fish hobbyist, the loyal Barksdale employee, capable street-wise hit man and “fixer”, and a father who wants more for his son, but we don’t get to see the prequel story.  We know he dropped out of the 6th grade and has been working with the Barksdales for a very long time, but there is a lot of character backstory that we’re missing.  It’s probably all in this book.  I’m going to order it the minute it appears on Amazon.

Oh, and for the nitty gritty stuff:  I hunted down the font that was used which was “Archer”, and downloaded a free version of it from ufonts.com.  I opened a .JPG of the book cover in Photoshop and used the eraser tool that was colored with the background pixels, and wiped away the words “of Grey”.  Then I typed in “of Wee-Bey” in white using my cool new font and ta-da!

4 responses to “Fifty Shades of Wee-Bey”