by Quinntero
by Life, UMW
No Comments on Finals Are Done. Finally. 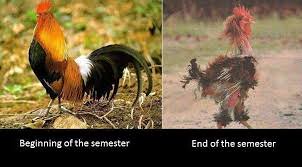 It’s been a really hard semester and it’s over.  It started with a car wreck in the second week, and ran downhill quickly with news of student deaths, and several rounds of cheating in my department. On the brighter side of things, a core group of my friends really solidified into a supportive group of moral-building and uplifting people that were the supportive structure upon which my success was scaffolded.  I made a serious effort to let them know how much this meant to me and throughout the semester I was not shy about telling them so in emails and heartfelt chats.  I felt more connected to this group of much younger people than ever before and it absolutely made the difference in how this otherwise rocky semester turned out.

This was the hardest semester for me academically, with three of the toughest courses now under my belt.  I would not recommend the simultaneous scheduling of Anewalt’s 330, Zacharski’s 350, and Davies’ 305 on anyone.  Just don’t do it.  Don’t. Any of the two would have been fine to take at the same time, but all three simultaneously was really tough, on top of Rotter’s German.  The last (and most humbling) final is finished as of this afternoon, so now I can begin my end-of-semester ritual of two fingers of Kraken Rum over ice while I turn up Elmer Bernstein’s Magnificent Seven Theme.  It’s so victorious-sounding!   Nothing beats seeing Elmer conduct his own stuff. Go watch it.  Shoo.