by Quinntero
by Assignments, ds106, Weekly Summaries
5 Comments on Zombies and Cheesewagons

This was a brutal week for work due in other classes, and I discovered that ds106 can be VERY addictive!

Dammit, #ds106 #wire106 stop being the tempting ice cream sundae of my coursework. I really need to eat my vegetables too!

Article Reflections – It was a thoughtful piece written about digital storytelling (from way back in 2010).  It proved to be an interesting mental exercise in deciding what was really a story, what constituted storytelling, and what was a pile of unrelated things.

Website Logo (design)  –  While I was making a new website logo, I went ahead and overhauled the entire site.  New background from blueprints for the Russian Soyuz rocket I found online plopped into Photoshop and faded everything into a light gray so it wasn’t too distracting from the text and other content that sits on top.  Next, grabbed a pair of bootprints, plopped them into Photoshop, split them into separate layers and made them look like a rambling trail of wafflestompers. Made a text layer for the title and stuck the paddler logo on top to complete the thing.

Because choosing a new theme wiped out my widgets, I went back and added the Twitter feed, a subscribe widget, recent comments, stuff like that.  I set up the categories as we were asked to do, and have begun tagging posts now so they’ll be more trackable/searchable.

Gross Food Haiku (Writing) – I noticed a few unappealing food choices being made by the working men in Episode 2 of Season 2.  We see the longshoremen putting raw eggs in their breakfast beer and chugging the whole mess down.  We see Bunk slurping crab guts while eating with NcNulty.  So, the only thing to do was to write a haiku.

My Big Fat Greek Triple Troll Wire Epigraph (Visual) – This could become an addiction for me.  It’s so much fun to mix and match people and quotes and yet still come out with a believable image that is a snapshot of a plausible scene. Photoshop again, for the win.  Plopped the text on there, and this time did as Jim Groom suggested and used a drop shadow behind the text to make it pop out more. 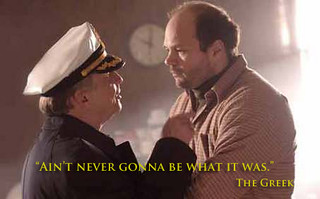 Cheesewagon Lune – I thought this was a neat little app that went out and searched for free images and walked the user through the creative process.  Choosing a mundane routine activity and writing a Lune poem about it was a thoughtful way to approach the day. This assignment was a “lenient Lune” in that the words were counted rather than the syllables.

Expressive Math – This was a fun little Daily Create assignment to depict your favorite math expression using “found” images on the internet.  Here, I went with V = IR, Ohm’s Law.

Zombie Haiku – Here, we were supposed to write a poem using only Z or S as the beginning letter of each line.  I decided I didn’t need no stinkin’ S, so I went with Z only.  I also went with American Haiku as the form, so here you have my version of the Zombie vs. Humans Haiku, complete with college kids playing the game.  Obviously they weren’t taking ds106 that semester and had waaaaayyyyy too much time on their hands.

I also participated in a discussion of Season 2 Episodes 1 and 2, for a marathon session while we awaited Jim Groom’s arrival.  He was looking for a phone booth so he could change out of his superhero leotard and get back into civilian clothes.  Phone booths are really hard to find these days, but absolutely necessary if you don’t carry a cell phone.

5 responses to “Zombies and Cheesewagons”