by Quinntero
by Assignments, Design, ds106
1 Comment on Hamsterdam Venn

I’ve been re-watching into Season 3, and the Hamsterdam episodes are among my favorites mostly because of the concept of a drug-tolerant zone in an inner city. Fascinating concept.

The assignment to create a Venn diagram required a lot more thought and playing around on scratch paper than I had anticipated.  I doodled a lot before settling on my final categories that would overlap.  I chose Hamsterdam as the centerpiece, around which are the people and their activities that make Hamsterdam possible.  Stringer Bell is involved in both drug sales and real estate development. Bunny Colvin is involved in police surveillance and the real estate development (or re-allocation and re-use) of a city neighborhood for Hamsterdam, and Herc is involved in the police surveillance and drug sales of Hamsterdam when he brings in customers for the drug dealers who were complaining about a lack of business.

I initially made this diagram in Photoshop, but I had difficulty in figuring out how to make circles with faintly overlapping colors, and finally gave up and went online and found a web app that you can sign up for free demos at Creately.com. This app produced the overlapping circles I wanted with colors that were faint enough to allow the overlap to be seen. Enjoy! 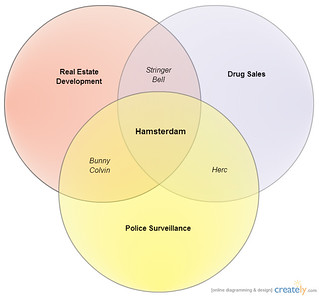 One Response to “Hamsterdam Venn”